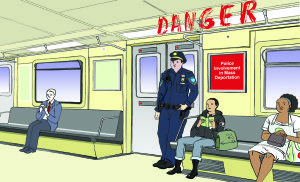 The U.S is deporting people at a record pace (close to 400,000 a year!) and the rapidly expanding collaboration between police and immigration is a key tool. Immigrant communities urgently need tools to protect and expand their rights. Immigrant Defense Project, Sex Workers Project, and Sylvia Rivera Law Project are working together to produce DANGER! Police Involvement in Mass Deportation.