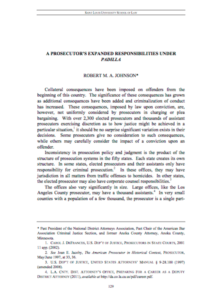 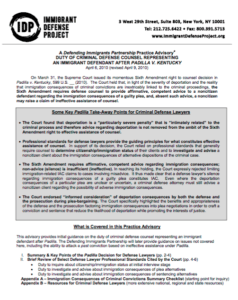 Ensuring Compliance with Padilla v. Kentucky without Compromising Judicial Obligations: Why Judges Should Not Ask Criminal Defendants About Their Citizenship/Immigration Status (January 2011)


In Padilla v. Kentucky, the Supreme Court confirmed that criminal defendants have a right to advice from counsel about the potential immigration consequences of their convictions, and that failure to provide such advice may constitute ineffective assistance of counsel, in violation of the Sixth Amendment.

This document outlines the constitutional, statutory, and ethical reasons that judges should not solicit or otherwise require defendants to disclose, orally or in writing, their citizenship/immigration status when that status is not a material element of the offense with which they are charged.

This advisory was prepared by the NYU Immigrant Rights Clinic in collaboration with the IDP.