Sharing their Humanity in the Face of Trump’s Hatred: IDP and IJN Partners Bring Criminalized Immigrant Leaders to Congress Post-Election 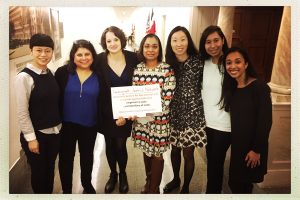 This month, IDP joined activists, elected officials, and its Immigrant Justice Network partners (Immigrant Legal Resource Center and National Immigration Project of the National Lawyers Guild) in Washington DC for Immigrants Speak Out: Day of Resistance Against Criminalization and Anti-immigrant Bills. There is still much work to be done to educate Members of Congress on how our immigration laws criminalize immigrants and harm families and communities, especially in the face of an Administration perversely invested in turning the power of a deeply flawed criminal justice system against immigrants; Immigrants Speak Out sought to expedite that process by bringing directly impacted immigrant leaders and Members of Congress face to face.

Alejandra was just a teenager with a few youthful offenses and a green card. She was separated from her family and thrown into an immigration jail for two years.

Roland was enjoying a cruise with his family. He was detained for signing the wrong name on a speeding ticket years ago.


Khalil was a young man trying to support his family while finishing his Master’s Degree. ICE raided his home and arrested him in front of his children for a prior arrest he had already served time for.

Escaping a violent situation, Jeanette built a new life for herself in Colorado. That was all threatened when she was stopped while driving without a license.

Erick was accused of gang affiliation. Though the accusations were false, he still lost his DACA status.

All Daisy’s father wanted to do was reunite with his family. Today, he’s sitting in a federal jail awaiting criminal charges for crossing the border to see his kids.

These are just some of countless harrowing stories that directly impacted immigrant leaders shared with Members of Congress last week as part of a briefing and Hill visits asking legislators to resist and repeal anti-immigrant laws that criminalize communities.

We came to the Hill after the midterms, where we saw a slate of candidates across the country run with some of the worst immigrant hate-mongering tactics of the Trump administration, only to be amplified at the national level by the President. At the same time, there was a groundswell of activism and progressive candidates grounding their campaigns in values of dignity and human rights for all. For the most part, the former failed while the latter triumphed.

Ahead of the December Appropriations Committee deadline, the congressional briefing brought together those who are most impacted by harsh immigration policies to speak to members of Congress, to share their experiences, to ask legislators to resist and repeal anti-immigrant laws that criminalize communities, and to offer solutions that will make a difference. The briefing addressed a number of pending anti-immigrant bills specifically, including proposed legislation like the bill introduced by Representative Kevin McCarthy, which would allocate $25B in taxpayer dollars to fund an expansion of the border wall. Anti-immigrant bills, such as this one , expand the criminalization of immigrants by increasing unlawful entry and reentry prosecutions, penalize jurisdictions across the country for implementing sanctuary policies, and expand grounds of deportation–further devastating immigrant communities.

IDP and our IJN partners plan to continue working with directly impacted immigrant leaders and Members of Congress to fight back against harsh proposed bills, to defund Trump’s hateful deportation agenda, and towards policies that uphold justice and human rights for all.

On a semi-related note, the last few weeks have been very intense. Now former-Attorney General Jeff Sessions was forced to resign, and while it’s clear that this was forced for suspicious anti-democratic purposes, we certainly will not miss a strong advocate for the Trump Administration’s anti-immigrant rhetoric and policies.

Fortunately, in the last few weeks we have also seen a groundswell of activism and progressive candidates grounding their campaigns in the values of dignity and human rights for all. Though we also saw a slate of candidates run across the country using the worst anti-immigrant and hate-mongering tactics of the Trump administration, endorsed by the President, we are pleased that, for the most part, the latter failed while the former triumphed. We’ve put together a short list of what we consider to be the highlights and takeaways from the midterm elections:

Despite all of these victories, there is still much work to be done to advance our values of justice and human rights for all. It is our hope that our work to educate Congresspeople, through initiatives like the Immigrant Justice Network and campaigns and events like Immigrants Speak Out, will be more effective in light of these recent victories. Our fight to bring to light the ways our immigration laws criminalize immigrants and harm families and communities, particularly under an administration hell-bent on turning the power of a destructive system against immigrants, is not over and we hope that tomorrow looks a bit brighter than today.