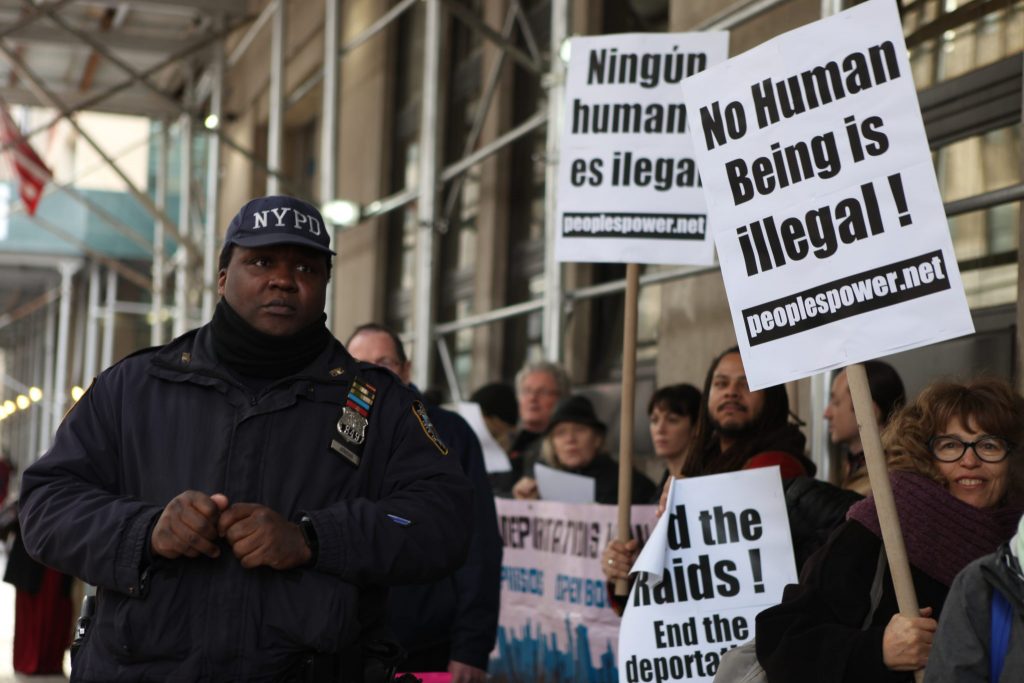 A federal immigration category that includes more than 50 classes of offenses, some of which are neither “aggravated” nor a “felony” (for example, misdemeanor shoplifting with a one-year sentence, even if suspended). This term was first created by the 1988 Anti-Drug Abuse Act to include murder, rape, drug trafficking, and trafficking in firearms or destructive devices. Congress expanded this term numerous times over the years, and most extensively in 1996. This is one of the government’s most powerful tools for deportation because it strips an immigrant of most choices in the deportation process. An immigrant – including a lawful permanent resident – who is convicted of an offense categorized as an “aggravated felony” is subject to mandatory detention (no bond) and virtually mandatory deportation (no possibility of applying for Cancellation of Removal or any other pardons or asylum).

Immigration courts define “conviction” broadly to include dispositions where: (1) a formal judgment of guilt was entered by a court, or (2) (a) a judge or jury has found the defendant guilty, the defendant has entered a plea of guilty or nolo contendere or has admitted sufficient facts to warrant a finding of guilt and (b) the judge has ordered some form of punishment, penalty, or restraint on the alien’s liberty to be imposed. This broad definition has been held to even include some dispositions not considered a “conviction” by the criminal court, such as low-level violations and convictions that are vacated after successful completion of rehabilitation programs.

Conviction or sometimes simple admission of one or more crimes involving moral turpitude may trigger deportation for some immigrants. This immigration law term-of-art has not been defined by Congress. It is a broad immigration category covering many types of offenses (includes many theft, fraud, drug, assault, sex, and some driving related offenses). Because it has no definition it is often difficult to determine what offenses might constitute a CIMT. Both of the inadmissibility and deportation grounds include CIMT provisions, so depending upon the circumstances, a conviction for an offense classified as a CIMT can trigger both inadmissibility and deportability.

Through CAP – which has existed since the 1980s – ICE agents identify and screen inmates in jails and prisons and either initiate removal proceedings while people are still in criminal custody OR transfer people directly from jail or prison to ICE custody for removal proceedings. CAP agents rely on informal relationships with jails and prisons to gain access to and conduct interviews with noncitizens in criminal custody. These interviews can occur before or after a detainer has been issued to facilitate transfer to the detention and deportation system.

ICE’s most effective tool to seal the pipeline from the criminal justice system to the deportation system. A detainer serves as a request to a jail or prison to hold a suspected noncitizen for ICE to pick up or to notify ICE when the jail or prison intends to release the person (for example, after criminal bail is paid the case is disposed of, or the criminal sentence has been served). Federal regulations provide that a jail or prison can hold someone for only 48 additional hours (not including weekends or holidays) based on an ICE detainer. However, jails and prisons frequently violate this 48-hour rule.

People are detained at every step of the immigration “process:” (1) awaiting adjudication of asylum or adjustment applications; (2) picked up and jailed without charges; (3) pending immigration proceedings; (4) after being ordered deported, while ICE is actively trying to remove them; and (5) sometimes indefinitely, where ICE knows it may not be able to deport someone with an order of deportation.

Mandatory detention (incarceration without the chance to apply for bond) applies to most people with past criminal convictions, asylum seekers, and all noncitizens considered “inadmissible” (people physically in the US, but never admitted legally at a port of entry). Detainees are housed in over 250 county jails, private prisons, and federal facilities nationwide, and are often held with the general criminal population.

Detention transfers occur often from one part of the country to another, without regard for access to family and counsel.

A category of legal bars that apply in removal proceedings when a person is accused of violating immigration laws after he or she has been legally admitted. Applies to anyone with legal status including LPRs, asylees, and people with Temporary Protected Status (TPS). Being deemed “deportable” means you have triggered the grounds of deportation.

A category of legal bars that apply when a person seeks “admission.” i.e. usually at the time of applying for a green card, asylum, etc. Violations of the inadmissibility grounds can also be used against undocumented people in removal proceedings (as well as LPRs returning to the U.S. after international travel). Inadmissibility bars and the specific RPI ineligibility bars are NOT the same, although they may overlap. Being deemed “inadmissible” means you have triggered a ground(s) of inadmissibility.

This is a federal offense criminalizing anyone who enters, attempts to enter, or is found in the U.S. after having been deported or denied admission. People who illegally reenter after having been ordered removed for an aggravated felony can face a criminal sentence of up to 20 years in prison.

Green card holder. Can work and live here indefinitely, but can always be deported if she or he violates deportation (and some inadmissibility) grounds (such as getting convicted of certain crimes) – regardless of length of residence in U.S., family ties, and other favorable factors.

An immigration judge or DHS (USCIS) official can, in certain circumstances, grant a waiver, which is like a “pardon,” to a qualifying person. The person may have triggered grounds of inadmissibility and is ineligible to be granted lawful status or the person has lawful status and is in removal proceedings because they have triggered a ground of deportation. Allows the judge or official to weigh the individual circumstances of a person who qualifies to ask for a waiver. Current immigration laws contain a handful of limited waivers, each with its own set of qualifications. Many criminal convictions disqualify someone from even asking for a waiver. Even if eligible, waivers are tough to get. For example, Immigration Courts handled nearly 400,000 cases in 2012, but less than 8,000 people were granted the most common type of waiver from deportation called “cancellation of removal.”