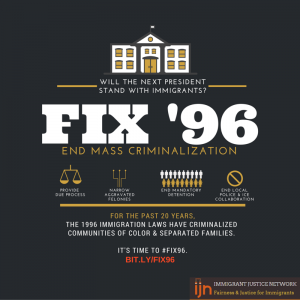 (April 28, 2016) The Immigrant Justice Network (a collaboration that includes IDP), is excited to announce of our campaign to #FIX96. We all acknowledge that our immigration system has many challenges. But what often gets left out of the conversation is that much of this dysfunction can be traced to a pair of immigration laws passed by Congress and signed by President Clinton in 1996, the Illegal Immigration Reform and Immigrant Responsibility Act (IIRAIRA) and the Antiterrorism and Effective Death Penalty Act (AEDPA).

The week of April 25 marks the 20th anniversary of one of these laws, which are directly responsible for expanding incarceration of immigrants, creating a fast track for deportations without due process, setting the foundation for local police and ICE collaborations and making legal immigration much more difficult. We believe that immigration reform is incomplete without a reform of these 1996 laws.

Congressional Resolution Calls for Reforms to the 1996 Laws

On Thursday, April 28, IJN, in partnership with Representative Raul Grijalva, the Congressional Progressive Caucus, the Congressional Asian Pacific American Caucus, over 30 other members of Congress and 84 advocacy groups across the nation, upported the introduction of a Congressional resolution calling for crucial reforms to the 1996 immigration laws, from restoring due process for immigrants and reinstating discretion for immigration judges to ending local police & ICE collaboration and narrowing aggravated felonies, amongst other provisions. Full resolution here | Congressional Progressive Caucus Press Release

Partners, Allies, and News on #FIX96

A diverse coalition of lawmakers, advocates, government officials and members of the immigrant community are all calling to #FIX96.

As you can see, this is a topic on the minds of many, most of all the countless immigrants and their families who have to bear the brunt of the impact of these laws still two decades later.

With a new presidential administration around the corner, we must collectively raise awareness around why these reforms are a crucial aspect of any future conversations around changes to our immigration system. We ask you to join us in calling to #FIX96.

Choose a template to print here and check out the IJN website  for inspiration & instructions; and show your support for #FIX96!

Change your profile picture or tweet the #FIX96 logo above along with any of the following statements (or one of your own):

Find out more about the intersections between mass incarceration and mass deportation, and why it’s imperative that  we continue to build solidarity between criminal justice and immigrant rights advocates | Read our vision statement, find community resources to use and read more stories about people affected by the 1996 laws at bit.ly/fix96

Tell the next president: It’s time to #FIX96

Use the script and questions below to get the presidential candidates on the record when they campaign in your community.

“Politicians from both parties have talked about reforming the broken immigration system. But they remain silent on addressing the immigration laws of the 1990s that created so much damage.

“Under these laws, millions of immigrants, including long-time green card holders and people who gained asylum in the US, have been criminalized and then forcibly deported away from their families and communities.

“Will you commit to changing the 1996 immigration laws that made detention and deportation essentially a mandatory minimum sentence for so many immigrants?”

For more information, click on our #FIX96 Resource Guide below

The ’96 Laws and the Damage Done

In 1996, Congress passed and President Clinton signed into the law the Illegal Immigration Reform and Responsibility Act (IIRAIRA) and the Anti-Terrorism and Effective Death Penalty Act (AEDPA). Touted as tools to control illegal immigration and combat terrorism, these laws have had severe consequences for immigrant communities, expanding the government’s ability to automatically detain and deport people on a massive scale without due process.

A Vision for Ending the Criminalization of Immigrants

The Immigrant Justice Network envisions communities that are healthy and thriving, instead of ones torn apart by unfair and discriminatory policing, incarceration, and deportation.

To secure the full human rights of all members of our communities, we need to end mass deportation and mass incarceration while addressing the racial, economic, and legal injustices that underlie both. The US government needs to invest in people and not more law enforcement. It should uplift communities, not maintain the laws that tear them apart.

IJN believes that people should not be detained and deported without a fair day in court, and especially not on the basis of crimes for which they have already been punished for. Partnerships with community groups and directly impacted individuals who have navigated or survived the detention, deportation, and criminal justice systems are essential to achieving this vision. These partnerships have the best chance of building long-lasting power for transformational change of our criminal and immigration systems.

About the Immigrant Justice Network

IJN is a collaboration between the Immigrant Defense Project, Immigrant Legal Resource Center, and National Immigration Project of the National Lawyers Guild. Since the 1980s, our organizations have protected, defended, and expanded the rights of noncitizens in the U.S. impacted by mass incarceration and deportation, including those who are labeled as public safety or national security threats.

IJN engages in advocacy, policy, education, technical assistance, training, communications, and litigation to address the needs of those caught in the intersection of the criminal legal and immigration systems. We have established multi-faceted programs that support criminal defenders, immigration and criminal reform advocates, and grassroots groups to protect the rights of noncitizens and transform these systems.