The Protect Our Courts Act is now law in New York State!

On December 15, Governor Cuomo signed the Protect Our Courts Act into law. This law will keep ICE officers from arresting individuals going to or leaving court, bringing relief from the constant threat of ICE surveillance and arrest for immigrants.  Find out more about what this means in our Community FAQ, available in both English and Spanish. IDP has also developed an overview of our three-pronged approach to getting ICE Out of Courts—legislation, litigation and court rules.

In April of 2021, DHS issued a revised courthouse arrest policy clarifying its position on when ICE and CBP officials can conduct civil immigration arrests in or near courthouses. For a brief explanation and analysis of the memorandum, please see IDP’s Legal Analysis of April 27, 2021 DHS Memorandum “Civil Immigration Enforcement Actions in or near Courthouses.”

Over the past decade, ICE has increasingly embedded itself in the criminal legal system, employing criminalizing narratives and the tools of the racialized systems of policing and punishment to advance it’s deportation. In New York State, one of the manifestations of this is increasing ICE raids, including ICE arrests and surveillance at courthouses. For the Latinx and Black immigrants who make up the vast majority of those detained and deported by ICE, heavy policing is a reminder of how quickly their lives could be taken away from them. Police run up the arrests and charges, ICE takes the record and runs with it. People are deported and disappeared from communities forever. The ICE Out of Courts campaign has been working with our partners in the Justice Roadmap, calling on the New York Legislature to address racialized state violence in all of its forms, and that includes protecting immigrant New Yorkers from ICE policing.

In early July, the New York State Legislature passed the Protect Our Courts Act (S425/A2176), and on December 15, Governor Cuomo signed the bill. This law will keep ICE officers from arresting individuals going to or leaving court, bringing relief from the constant threat of ICE surveillance and arrest for immigrants. Read our press release about our victory here.

The Immigrant Defense Project documented an alarming 1700% increase in ICE courthouse arrests and attempted arrests across New York State under the Trump administration. As leaders of the ICE Out of Courts Coalition, we coordinated a campaign to get #ICEOutofCourts in New York State. For the past three years, our statewide coalition of anti-violence advocates, public defenders, civil legal services providers, labor unions, and membership organizations has been steadily building our campaign, calling on the New York State government — the Office of Court Administration, the legislature, and the governor — to stop ICE from targeting immigrant New Yorkers in the courts.

In addition to the New York State law, the ICE Out of Courts campaign has celebrated two other victories: On June 10, 2020, Federal District Court Judge Hon. Jed Rakoff ruled that ICE’s dangerous practice of conducting courthouse arrests is illegal and in April 2019, the New York State Office of Court Administration (OCA) announced it was implementing rules prohibiting ICE from arresting individuals in state courthouses without a judicial warrant or judicial order. Read the rules here, and our press release about their announcement here.

Assemblywoman Michaelle Solages and Senator Brad Hoylman introduced the Protect Our Courts Act in January 2019, the most significant piece of state legislation in the country to protect access to the courts for immigrant communities by imposing restrictions on civil immigration arrests of those attending court. The bill passed the NYS Assembly on July 20, 2020 and the Senate on July 22, 2020. Governor Cuomo signed the bill on December 15, 2020. Information about the bill and the bill text itself can be found at the links below.

On June 10, 2020, Judge Rakoff ruled that ICE’s dangerous practice of conducting courthouse arrests is illegal and enjoined the agency from conducting any civil arrests at courthouses, their premises, or grounds, and also of anyone required to travel to a New York State courthouse as a party or a witness. In the first permanent injunction in the nation barring the practice, won by the New York State Attorney General Letitia James and Brooklyn District Attorney Eric Gonzalez, the judge found that the disruption to New York State courthouses to be undeniable, in terms of the chaos caused, the waste of judicial resources, and the substantial harm felt by the public. In his ruling, Judge Rakoff cited the Amicus Brief authored by the Immigrant Defense Project and signed by 45 organizations, as further proof of ICE’s illegitimate use of force against individuals in and around courthouses. The Immigrant Defense Project applauds this decision, as it clears the way for the Protect Our Courts Act, pending legislation with majority support in the New York State Assembly and Senate, to enshrine these protections into state law and hold ICE accountable.

Safeguarding the Integrity of Our Courts: The Impact of ICE Courthouse Operations on New York State 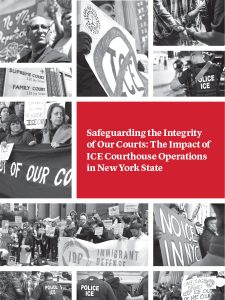 For two years, the ICE Out of Courts Coalition gathered qualitative and quantitative data on the impact of ICE courthouse arrests from stakeholders across issue areas and roles within the justice system. Safeguarding the Integrity of Our Courts: The Impact of ICE Courthouse Operations in New York State provides a 360-degree view of how courthouse arrests derail and disrupt the functioning of the judiciary system.

Report: Safeguarding the Integrity of Our Courts (88 pages)

“We have concluded that this report provides us with a sufficient basis to take the step that many have asked us to take to require that ICE present a judge-issued warrant before conducting an arrest in a state courthouse. Although we’re not aware that any other court system in the country has taken this step, this comprehensive, well-documented report has convinced us that this change in policy is now appropriate and warranted.”

In March of 2019, IDP, with the Kathryn O. Greenberg Immigration Justice Clinic at the Benjamin N. Cardozo School of Law and O’Melveny & Myers LLP,  filed a lawsuit under the Freedom of Information Act (FOIA) in the United States District Court for the Southern District of New York for documents about ICE’s courthouse arrest practice. Click here to read the complaint and underlying FOIA request.

In June of 2017, a coalition of legal services and community-based organizations sent out a survey to the field from June 12 – 23, to better understand these concerns. 225 advocates and attorneys from 31 counties across New York State participated. The participants work in criminal, family, housing, employment, education, and immigration law, and practice in criminal, family, and civil courts in New York State. Click here to view the results of the survey.

In 2017, the ICE Out of Courts Coalition sent the following letters to Chief Judge Janet DiFiore and Chief Administrative Judge Lawrence Marks. The letters describe the increase in ICE activity in New York State courthouses over the preceding months, and outline the negative impacts that increased ICE activity has had on our communities. Both letters can be found below.

On June 29, 2017, New York City Council Committees heard testimony on the increase presence of ICE in city courthouses, and the impact of this increased presence on their clients. IDP’s Andrew Wachtenheim testified at this city council hearing – a written copy of his testimony can be found below.

On April 10, 2019, the New York City Council Immigration and Criminal Justice Committees held a hearing on a resolution urging the State Legislature and Governor Cuomo to pass the Protect Our Courts Act. View press release here.