Momentum continues to build against mass detention and deportations. A key focus of this advocacy has been to end collaboration between police and ICE, with a growing call to stop all deportations. IDP has also focused on addressing inequalities in the criminal justice system to limit the number of immigrants who end up in the deportation pipeline and also to fight against mass imprisonment. IDP continues to be at the forefront of efforts to challenge mass deportation programs and to disrupt dominant narratives around immigrants with criminal records. IDP works to support community-based organizations fighting for immigrant rights, strengthen the power and expand the rights of immigrants with criminal records, build alliances with criminal justice advocates, and influence policy changes on a local and national level.

ICE Out of the Courts 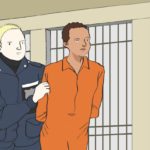 The Immigrant Defense Project closely monitors ICE activity in the courts and has seen a significant uptick in ICE courthouse arrests since the beginning of 2017. In response, we are coordinating a campaign to get ICE Out of the Courts in New York State and have been supporting similar campaigns nationally.  [More] 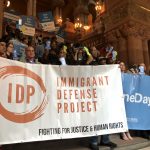 In the Fall of 2018, IDP launched Pardon: the Immigrant Clemency Project, an initiative that aims to protect immigrants and to push back against policies that disempower and marginalize people with criminal histories. [More] 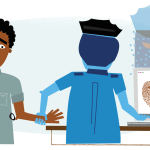 The criminal legal and immigration systems have become increasingly entangled.  Inevitably, when a criminal legal system that is institutionally biased against people of color, including immigrants, becomes enmeshed with an immigration system that lacks due process, immigrants are routinely treated unfairly and unjustly under the law. IDP works to keep the two systems separate, and to protect and expand rights in both systems. [More]

IDP identifies strategic initiatives and builds alliances to end the injustices at the intersection of the criminal legal and immigration systems, such as marijuana legalization, policing reform, and more [View Initiatives Here]